Storming the Capitol: Insurance’s role in covering invasions past and present 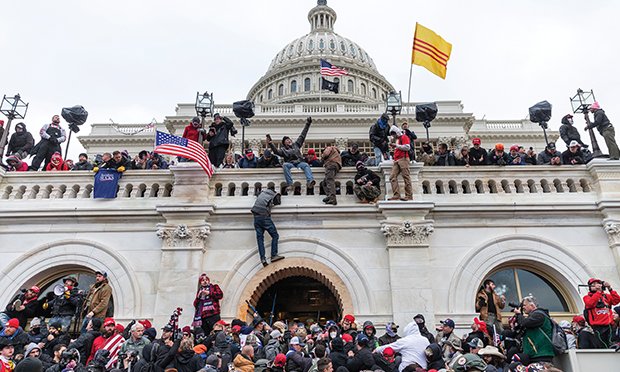 History provides a great opportunity to learn from past mistakes to avoid repeating them today. Consider this semi-fictitious account of another invasion of the Capitol. Benjamin Franklin organized the oldest property insurance company in the U.S. in 1752. He recognized the need to protect buildings from losses such as fire. Like so many good ideas, Congress decided it did not need insurance on any federal government buildings.

In 1813, rumors had been flitting around about a possible invasion of the Capitol, but congressional representatives continued to work in a bubble of self-seclusion (self-delusion?), believing the invaders would not dare approach the very symbol of American democracy.

The President was eager for the ruckus and nearly ended up in the fray before reversing and watching the unfolding events from the sidelines. The Secretary of State inserted himself into the unfolding proceedings and did not assist the defense outside of the Capitol, further damaging the nation’s ability to defend democracy, according to his opponents.

Meanwhile, Rear Admiral George Cockburn and Major General Robert Ross of the Royal Navy marched into Washington, D.C., and breached the Capitol, despite orders to the contrary from their task force commander, Alexander Cochrane. Those meant to protect the Capitol, the militia, were caught flat-footed. They were ill-prepared, ill-equipped, and many deserted their posts. Members of Congress and the government fled, leaving the building vulnerable to the attack. A foreign flag occupied the capital of the United States for the first time in history.

The invaders began looting government property, taking souvenirs, and setting fires first to the north wing of the Capitol and then the south wing. On August 24, 1814, the British burned the Capitol as a tit-for-tat retaliation for the U.S. troops’ sacking of the Canadian capital of York (present-day Toronto). According to historical archives, the British fires set in Washington, D.C., could be seen from 50 miles away.

Franklin died in 1790, three years before President George Washington laid the corner foundation stone of the Capitol. Franklin could not urge Congress to find funds for a fire policy but imagine if he had. Stretching the boundaries of history, Franklin’s policy looks suspiciously like the ISO CP 00 10 10/12 with a Special Cause of Loss Form, CP 10 30 10/12. Let’s imagine how a coverage decision might evolve if the first congressional event had a fire insurance policy.

Although Cockburn and Ross led a gentlemanly invasion into the U.S. capital city — there was no plundering of privately held property — their acts were the results of war and were not covered. For this article, we’ll also stretch the narrative a bit to present an insurance claim for a historical event and imagine there were individual Americans who tagged along and took advantage of the chaos.

When President Madison and the American government returned to Washington, D.C., it filed a claim with the fictional Franklin Fire Insurance Company for damages to the Capitol. Separating the war damage from the damage of the rioters proved difficult for the insurer.

After the looting, many articles from the nascent republic’s newspapers quoted senators and representatives who decried the acts of terrorism against the Capitol. Franklin Fire offered terrorism coverage as an endorsement in its insurance policy. Terrorism coverage is a risk-sharing cooperative with the federal government and private insurers to share losses due to a major terrorist attack.

The endorsement covers damaged property (buildings, contents, inventory). To qualify for coverage, the incident must be a violent act that is hazardous to people and property; be in the U.S. or an area of U.S. sovereignty; be committed as an effort to force the American people or to influence the U.S. government, and cause property and casualty damages above $5 million.

George W. Campbell, the 1814 Secretary of the Treasury, did not declare the burning and looting of the Capitol a terroristic attack since the requirements for Terrorism Risk Insurance Act (TRIA) were not met.

Due to the different causes of loss, Franklin Fire made the underwriting decision to accept the majority of coverage under the cause of loss for riot, civil commotion and vandalism. Franklin Fire issued a reservation of rights letter and later issued a letter of declination for the damages it considered a result of the War of 1812.

The congressional members’ retreat toward safety during the oncoming British invasion and American looters was swift. The representatives and senators did not have time to gather valuable documents — perhaps with spy deciphering codes — and save them from the pilfering.

Franklin Fire policy offered coverage for the loss of Congress’ valuable documents up to the sublimit.

Fortunately for the United States, the seat of government had not yet been completed, and in a rare act of serendipity, a torrential rainstorm — some thought it might be a hurricane — doused the fires set by the Redcoats and prevented further vandalism by the rioters. Franklin Fire’s policy had additional coverage for debris removal, payable once incurred, up to the limits set forth in the policy for clearing the damage caused by the vandals.

Newspapers and the independent flow of information have always been important to our republic. Inveterate journalists reported the names of the bad actors involved in the riot since there were no electronic media outlets for selfies in 1814. A few weeks later, the U.S. government filed charges against the Americans alleged to be involved in the rioting at the Capitol.

Franklin Fire Insurance Company, having the names of the alleged bad actors from the press, filed subrogation claims against the purported rioters’ homeowner policies for the vandalism of the federal government buildings and destruction of the contents.

The carriers, according to policy language that states they will provide a defense even if the suit is groundless or false, stepped forward and investigated the claims asserted by Franklin Fire. However, it quickly became apparent the vandalism, rioting and civil commotion were intentional acts. A coverage question appeared, and the homeowner insurers issued a reservation of rights letters within a fortnight.

Based on the outcome of the federal government and court records, the homeowner insurers ultimately denied coverage and liability for the acts of their insureds. This left Franklin Fire with the choice: Obtain reimbursement from the vandals individually or simply walk away. It was a cost analysis. Since most of the rioters were farmers and lacked liquid wealth, Franklin Fire closed the subrogation claim.

History teachers say: “The past is never really past.” The January 2021 riot and civil commotion surrounding the Capitol also resulted in the building’s vandalism. Representatives and senators have called the acts those of “terrorists.”

Unlike our fictitious Franklin Fire claim, the Capitol does not have a commercial property policy; as in 1814, the federal government self-insures. Because there is no private insurer for the Capitol Building, TRIA would not respond to the events of January, even if declared to be an act of terrorism. The average taxpayer will foot a portion of the repair costs the building suffered.

Current newspapers report the Architect of the Capitol, the department tasked with preserving the building and grounds on Capitol Hill, will have some funds to repair the building. The department can subrogate for the broken glass, doors, and furniture and vandalized paintings and walls from the at-fault parties, although the claims will likely be met with the same result as our fictitious 1814 subrogation claim. One last thing the Architect could do to recoup some costs associated with the repair and renovation is asking the Attorney General for remuneration as part of those who are found guilty.